COVID-19 ALERT: All Aldrich office locations are currently closed until further notice.
Visit our COVID-19 Resource Center to learn about our continued service and additional support for you during this time.

Insights
♦
Beyond the Benchmark: Market Commentary with Darin Richards, Q1 2019

Each quarter, Director of Aldrich Wealth Nicole Rice and Chief Investment Office Darin Richards provide market commentary and make projections for the upcoming quarter. This conversation is accompanied by a deeper dive into market performance and outlook as well as featured articles on popular topics such as retirement planning and changes in interest rates.

Patient investors were quickly rewarded as a challenging fourth quarter was followed by the best quarter in a decade. Domestic equity markets posted their best January results since 1987. The market rise was largely indiscriminate, as every sector of the S&P 500 Index turned in positive results. Small and mid-cap stocks outpaced large caps and growth bested value. 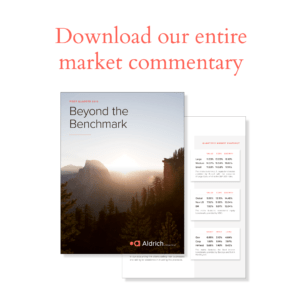 The Fed and the ECB both indicated they wouldn’t likely hike rates in 2019. The U.S. 10-year Treasury yield fell over the quarter reaching its lowest level since 2017. In March, the three-month Treasury bill yield rose higher than the 10-year yield.

The U.S. economy, as measured by the change in the Gross Domestic Product, increased 2.2% during the fourth quarter, well below the 3.4% advance in the prior quarter. In 2018 the economy advanced 2.9%, the most since 2015.

Stocks are off to a strong start and are well positioned to outperform bonds in 2019 as we anticipated. Economic growth is poised to slow modestly, particularly among developed markets, and should dampen equity returns for the remainder of the year. Stable growth in emerging markets should support growth globally and there is minimal chance of a recession.

For more on market trends this quarter, watch Nicole’s interview with Darin or read our entire quarterly market commentary.

Darin joined the Portland wealth management firm in 2004, bringing more than a decade of investment and financial consulting experience with him. As chief investment officer for Aldrich Wealth, Darin is responsible for developing, and implementing our investment philosophy and leading the investment committee. He works directly with some of our most complex and largest clients and also…

Nicole has dedicated her entire professional career to helping individuals and corporate clients with their financial needs. She has experience working in the areas of wealth management, retirement planning, tax accounting, design and implementation of non-qualified benefit plans, insurance, and qualified benefit plans. Nicole provides investment-related guidance to individuals and businesses to meet their short…

Contact us to speak with one of our advisors.

Which email should we send this to?

Your list of the 10 best and 10 worst ways to use your tax refund will be on its way shortly.

Ready for your wealth check-up?

Download a checklist of the 22 questions you should discuss with your financial advisor.